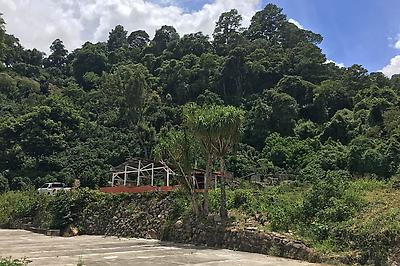 We're very excited to be bringing another lot from El Socorro to the club this year, one of our favorite farms in Guatemala. This particular lot from the De La Cerdas is a red bourbon - one of the archetypical coffee varieties that many other cultivars have split off from. It's a relatively tall coffee plant with small, thick coffee cherries that are, predictably, red. Finca El Socorro grows several different bourbons - we've featured both red and yellow bourbons in years past - but this is the one we chose for the club this year because it is delicious.

We're getting a fantastic mix of flavors from this coffee that leads off with a juicy and tart black cherry note, followed by a dense cocoa base and some nougat-like richness. This coffee could easily be described as a "smooth sipper" or something similar, but we'll just say flat out that it's really really good. El Socorro has been putting out great coffees year after year, and we're very happy to be buying from them again. It's been wonderful to see their coffees get recognized at national competitions and to see how their prominence in the Guatemalan coffee scene has grown. Their coffees are special, and we're excited for you to get a chance to enjoy another one.