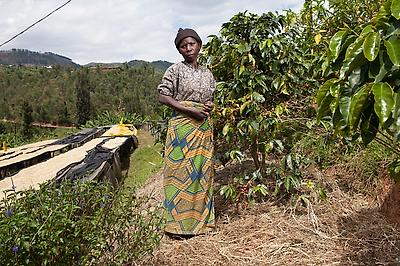 Gitesi is a private washing station owned and run by father-and-son team Alexis and Aime Gahizi. The washing station was built in 2005 and began processing coffee in 2006, located in the Gitesi sector in the Western Province of Rwanda. Alexis is originally from the Karongi District where Gitesi is located, and his family has been growing coffee in this region for generations. Aime has an engineering degree created a very comprehensive water management system for the washing station, to such an extent that it is being used as a model for future stations - talk about being ahead of the curve! That said - this particular lot is a natural coffee, which is relatively new for Gitesi and doesn't use as much water. They began natural production in 2018, and have quickly gotten the hang of it, as this lot's stellar flavors show!

This coffee is a straight-up natural in the best sense: boozy coconut rum flavors upfront, with a bright dried fruit aftertaste. It's a real distinct brew and one that we think the club will get a kick out of trying. Make yourself a cup or two of this wild coffee, and let the club know what you think by leaving a review on the site!

I couldn't distinguish particular flavors in this one, it was just an overall pleasant morning coffee.

My wife remarked that this is the least bitter coffee she's ever had - and she's right. This is a great, smooth coffee

This coffee is quite bright and fruity, which I like. Later, it gets a more molasses-like taste to it, making for an interesting transition. It’s nice to have a coffee that is an easy drinker, but that isn’t just one note.

A gorgeous coffee, smooth and round with a big, chocolate/molasses finish. I'd have to rank this Rwandan as one of the best that I've received from Moustache in 2021. This lot will disappear quickly.

Normally I prefer coffees from the Americas, but this was a pleasant surprise. Like others I couldn't really distinguish the notes, but it was one of the mellowest cups of coffee in a long time.