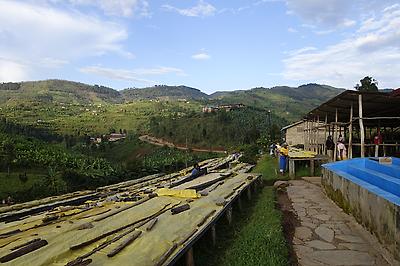 PB’s are a "by-product" of bigger lots that are separated during the milling and sorting phase. We find them to be distinctive and packed with flavour, with the characteristics of the normal Gitesi lots, but a lot denser. In this case, the PB’s have been separated from the natural lots Gitesi produced. Gitesi is a private washing station owned and run by a father and son team, Alexis and Aime Gahizi. The washing station was built in 2005 and began processing coffee in 2006. In the early years they were struggling to keep the washing station operating, and they have fought hard to make it a profitable business. In 2010, they managed to turn a profit and have since built a sustainable company, located in the Gitesi sector in the Western Province of Rwanda. Alexis is originally from the Karongi District, where his family has been growing coffee for generations. Aime has a degree in engineering and has created a very comprehensive water purification system for the washing station, to such an extent that it is being used to model future water purification systems for washing stations. Aime began familiziaring and experimenting with natural processed coffees for Nordic Approach last year, and was asked to explore natural processing to diversify our range coming from Rwanda. To no surprise, we find the typical well processed Gitesi signature with a funky jammy touch.

Bright, elegant, with a heavy mouthfeel; Gitesi is our go-to cup of coffee. With dark chocolate and white sugar-sweetness, it’s hard to have just one cup! If you haven't tried one of Aime and Alexs' coffee's yet, this is a great place to start.