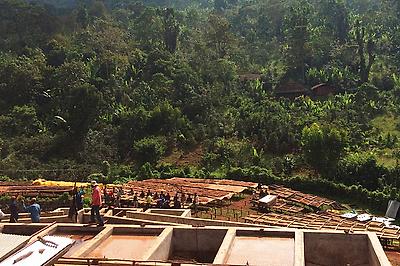 The Reko washing station is named after the nearby Reko mountain, which means 'challenge' in Afaan Oromo. The name refers to the challenge of climbing the mountain, but Faysel Yonis & Masreshu Sima who own and operate the washing station adopted the symbolism: it is their challenge to produce the best coffees in Yirgacheffe. To do so, Reko washing station employs several site managers that are assigned to specific lots as they come in. Rather than focusing on one part of the production, these managers follow the lots from sorting and pulping all the way through drying and packing - ensuring that each lot has consistent attention from the same trained professional. The final produced lots from the Reko washing station have bold, bright flavors and consistent quality - like the one you're about to enjoy!

Reko is a pronounced coffee with flavors so bold we initially thought it was a natural when we did our first blind cupping. We tasted a juicy apricot note along with sparkling jasmine flavor, capped off with a bit of tartness similar to red currant. It was a total stand-out on the cupping table and we just knew that the club needed to try this one. Afer you give it a brew, we think you'll understand why.

I think this coffee is very balanced with its flavors. A sold well rounded coffee

Well balanced but not my cup of coffee

Great flavor and aroma. A great way to start the day. Brewed mine a little strong to bring out more flavor.

I've had this coffee brewed using a Chemex and a Moka espresso (not a real espresso) brew method. Both gave me a beverage that I've thoroughly enjoyed. I definitely can detect the apricot...the other notes are lost on me. Still – highly recommend!

I like it. Maybe a little dry tasting? Not the same sort of excitement that I've gotten from other moustache coffees but still tastier than anything I buy outside of this subscription. Usually I drink these black but I feel like adding a splash of milk to this one. I don't think I taste any of the tasting notes but I'm usually pretty bad at that.

This coffee is fantastic. I was a little skeptical about whether or not I'd be able to taste the notes of red currant and jasmine but it is smooth and good all the way through.

Took this one camping. Doing pour-overs with a JetBoil was a little sloppy, but this coffee tolerated the variation. I brewed it strong with a plan to dilute if necessary, but I never did. Even extra-strong this was interesting and complex.

Glad to hear the coffee holds up on the go - I just might have to find somewhere to pitch a tent to give the same a try. :)

This coffee definitely hits all the notes as expected. A bit more floral-forward than to my taste, but still a solid morning cup.

The first day we brewed the Reko, it was almost all fruit/acidic notes. After the beans had fully degassed we started getting some chocolate in the finish. We really liked this one.

Hey Greg - glad you're liking it! Curious how you're brewing, I wonder if that might have something to do with the chocolatey finish. Enjoy!

I've had this as both a French press and a drip since receiving it and it is tasty. Lots of flavor going on. One of my favorites.

Glad you're enjoying it!