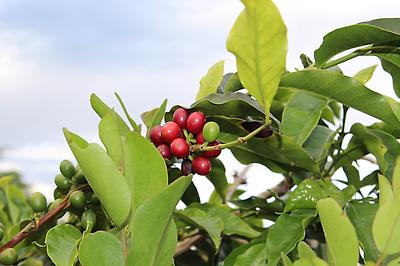 With a name like 'Bomba de Fruta' - you know you're in for some strong, fruity flavors! This coffee was grown in Huila on Ana Cecilia Uribe's Finca La Cumbre farm. Ana is the matriarch of a well-known coffee producing family in Huila that operates under the name "Alma de Huila" (the soul of Huila) and manages 5 different coffee farms. They used to process all their coffees at the farms, but when they started to see more interest in naturals they realized they needed a facility in a drier area of Huila - so they built a central beneficio in the town of Garzon where specialty lots are sent to be processed as naturals. The lower altitude and drier conditions allow them to produce some really stellar naturals with strong, bright fruit notes - something that the Uribe name has now become known for in Huila!

This coffee certainly doesn't disappoint - they name hits the nail on the head with an explosion of fruit flavor from the get-go. We're picking up on a very distinct raspberry note with a good sweetness and acidity - as well as a more tropical fruit flavor akin to pineapple that adds even more layers of acidity and sweetness. For fans of naturals, or just folks who want to try a coffee that's unbelievably flavorful and dynamic - this lot is a must-brew. Cheers!

The moment I opened this coffee I was hit with some strong, wonderful, fruity scents. As strong or stronger than the Ethiopian coffees I normally go for. I brewed one mug with a breville youbrew and filtered water. Stay by your machine just to smell it when it is brewing 😍😍😍 This also tastes more like a Ugandan or Ethiopian coffee to me than a typical Huila, and that suits me just fine. However, if you aren't used to natural coffees/ berry flavor in your coffee, I do not think you will want to start here. On a side note, I liked this month's packaging as well. It's silly, but it adds to the experience.

The smell of the coffee is so wonderful. Please keep this coming. I am all in for this. Made french press, and whole kitchen smell heaven.

I loved this one because of the burst of raspberry and citrus you get from the nose to the first sip. One of my favorites ever!

This coffee is a great treat! It is indeed very fruity with the pineapple type accents. There is another very unique and distinctive aroma and flavor accent that I get after brewing, yet I cannot put my finger on it. It is an almost savory/salty? accent almost reminiscent of some root vegetable or something. Had good and pretty deep body as a pour over. Also works well as an espresso, but I have needed a much stronger ratio if using to make a latte, etc-aprx twice the coffee/water ratio. But if sone it is a really fruity good tasting latte.

I never have experienced a coffee so distinct in aroma and flavor! Very prominent citrus flavor, I can definitely see where the pineapple note comes from. It does have relatively high acidity when brewed in a french press, which can have a drying effect on the mouth. I decided to try brewing cold brew — this coffee is truly meant for it I feel! The fruitiness came through without the strong acidity. If you want a coffee with a pow!, this one delivers!

It grew on me....awwwww couldn't resist.

But it really did. Whenever I try a new coffee I don't usually love it immediately and this was no exception. But ....for a natural process...it blossomed a little sooner. I like this one with a tad more water than usual. Perhaps 1g per 22-24ml rather than 20ml. Will try it as a pourover. If you really like natural process and fruity then you ought to love this. I lean to washed. It was great to try but probably won't buy it a second time. Liked it but not in love.

The fruit is right in front, and reminds me a bit of sour candy. I just really enjoy naturals. I would also like to second the note on the packaging: The new vacuum bags are very pretty.

This is a real lovely blend. I don't usually taste the notes, but the pineapple was very much there.

These are the best naturals I've ever had. They are easily some of my favorite beans in recent memory. I was shocked by the aroma and flavor. Highly recommended!

Lives up to its name

Come for the fruit, stay for the acid. This one is not for the fan of traditional or classic roasts. This bad boy is big, bold, and ostentatious in fanning its feathers of fruit juice and acid. It's not balanced and its not trying to be. Not my cup of tea, but nice to try for a change of pace. If you're a fan of naturals and sharp, fruity high notes, you'll like love this, so add half a star to my rating in that case.

Made a cup this morning with V60 pour over and wow were the smells incredible! I’ll be honest it wasn’t as juicy as I was hoping for, but it was very fruit forward as the name implies. Overall a very tasty cup!

Agree with some other reviewers that this is very reminiscent of an Ethiopian. Big fruit aroma right out of the bag, just grinding the beans gives you a good idea of what to expect. Both pour over and drip have produced excellent brews, with a bright and juicy berry note leading the charge with a really nice balance of sweetness/acidity rounding out the cup. If you haven't tried it yet and like Naturals, get a bag before they run out.

incredible aroma and flavor, please send me some more!